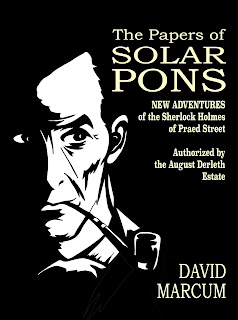 Solar Pons – If you’ve already met him, then you know that he’s the next best thing to Sherlock Holmes. And if you don’t yet know him, what are you waiting for?


Sherlock Holmes is one of the most recognized figures in the world. Just his profile, or the items associated with him – the deerstalker, the magnifying glass, and the pipe – are enough to suggest “detective” to people from all around the globe. They may have never read a Holmes book or seen a film or television show about one of his adventures, or encountered him in any way, but they still know Holmes and what he stands for.

And for those in the know, both general mystery fans and dyed-in-the-wool Sherlockians, an acquaintance with Solar Pons provides the same kind of enjoyment. A visit to Pons's residence in 7B Praed Street is nearly as wonderful as climbing those seventeen steps to 221b Baker Street.


“Solar Pons came into being out of Sherlock Holmes . . . .” – August Derleth 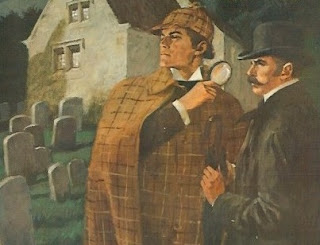 In 1928, nineteen-year-old college student August Derleth (1909-1971) wrote to Sir Arthur Conan Doyle, asking if any more Sherlock Holmes adventures were going to be published. (Conan Doyle, Dr. Watson's Literary Agent, had been involved the previous year when the last Holmes story on his watch, "Shoscombe Old Place", was published.) Sir Arthur replied to young Derleth that No, there won't be any more Holmes stories. (Could anyone have ever been more wrong?) Upon receiving this negative response, Derleth then decided to provide some of his own.

However, rather than relating more tales of Holmes and Dr. Watson, he ended up introducing the world to Solar Pons and Dr. Lyndon Parker, both living and working in London during the 1920’s and 1930’s. Pons solved crimes using deduction and ratiocination, often referring to Holmes as “The Master” or “My illustrious predecessor”. Pons quickly became an established master detective in his own right, and since his first appearance, he has been a particular favorite with Sherlockians.

When Derleth decided to create his own detective stories, he flipped ahead on his calendar and picked a date upon which to write his tale. “In Re: Sherlock Holmes” was how he noted the day, and when that day arrived, he sat down and began to write. Years later, when his first collection of twelve Pons stories was published, he called the book In Re: Sherlock Holmes in honor of that event. But on that day in the late 1920’s, when Derleth had set himself the task of creating a new Holmes-like character, he was starting from scratch.


“[Solar Pons is] a clever impersonator, with a twinkle in his eye, which tells us that he knows that he is not Sherlock Holmes, and knows that we know it, but he hopes we will like him anyway for what he symbolizes . . . The best substitute for Sherlock Holmes known.” – Vincent Starrett

Of course, it isn’t entirely accurate that Derleth was starting without any plan and creating things from nothing. The Holmes and Watson model that is so apparent in the Pons stories was already in place. Pons is very much like Holmes in both appearance and behavior – he smokes a pipe, plays the violin, wears the dressing gowns, does chemical experiments in his sitting room, and most importantly - he solves crimes by the old-fashioned (by then) methods of ratiocination and deduction. Additionally, Derleth mimicked the presence of Dr. Watson with Dr. Parker, who narrated Pons’s adventures. Then there's his brother Bancroft Pons (who sometimes is the British Government), Inspector Jamison of Scotland Yard, and Pons and Parker's landlady, Mrs. Johnson. Pons and Parker live at 7B Praed Street, near Paddington Station - not the same Marylebone neighborhood where 221b Baker Street is located, but not a very far walk either.

On each of my three extensive Holmes Pilgrimages (so far) to London and other spots around the Holmesland, I've arrived in London through Paddington Station. A walk down Praed Street takes me right past 7B - which is clearly not the same building that was there in the 1920's and 1930's when Pons and Parker were in residence. From there, after paying my respects to the sacred Ponsian site, I make my way on over to Baker Street, my favorite spot in the world.

Here I am, along with my ever-present deerstalker, on one of my passes through Praed Street, in front of where 7B was located: 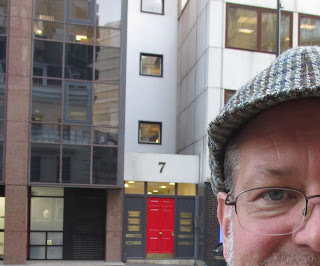 As mentioned, the Pons stories were set in London, as had been the Holmes adventures before them, but Derleth's efforts were shifted up to the 1920’s and 1930’s. The Pontine Canon, as it’s called, runs from mid-1919, when Pons and Parker first meet and agree to share rooms in post-World War I London, through the summer of 1939, not long before England is plunged into World War II. And what about after 1939? I'm convinced that some of the Basil Rathbone Sherlock Holmes films that are absolutely set in World War II are actually Pons adventures, with his name changed to Holmes to avoid confusion - Check out the blog post exlaining this at "Basil Rathbone's Solar Pons Films" at http://17stepprogram.blogspot.com/2016/11/basil-rathbones-solar-pons-films.html)

Between the 1920’s and the early 1970’s, Derleth produced over seventy Pons short stories and novels. The first of these were published in pre-Depression magazines, but with the financial failure over the next few years of so many of the journals that had been buying the Pons adventures, Derleth chose to turn his attention elsewhere, focusing on his widely respected historical novels. However, in 1944, Ellery Queen was putting together a landmark volume, The Misadventures of Sherlock Holmes. He asked Derleth to contribute one of the old Pons tales, and this brought about new interest in the man who was known as "The Sherlock Holmes of Praed Street". Subsequently, Ellery Queen and Vincent Starrett, upon learning that there were other Pons stories from several years before, urged Derleth to collect them into a single volume. Thus, the aforementioned In Re: Sherlock Holmes was published in 1945, and afterwards, a number of other stories were written and subsequently collected. These are: 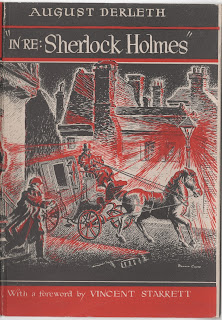 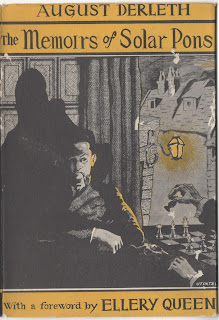 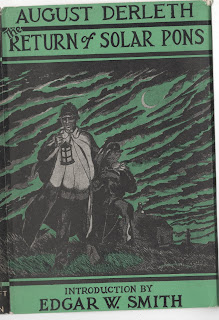 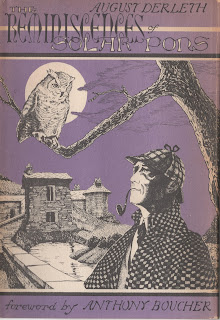 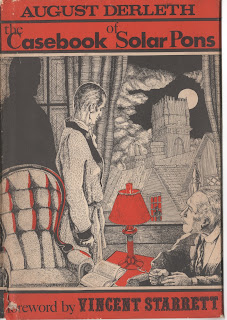 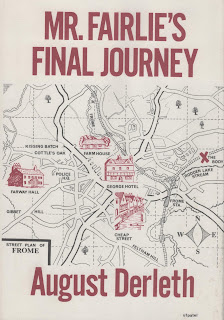 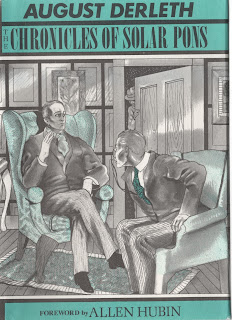 Interestingly, the first five Pons volumes follow the naming conventions of the Holmesian Canon, The Adventures, The Memoirs, The Return, The Reminiscences (which is the subtitle to His Last Bow), and The Casebook. Before he was finished, Derleth had written over seventy Pons adventures, more than the pitifully few sixty included in the original Holmes Canon.


“Now, meet Solar Pons, the Pride of Praed Street . . . The Master is not too visible – that is, to the naked eye. But you will feel his dynamic presence once again . . . Yes, dear reader, but turn a page, and again – the game is afoot!” – Ellery Queen 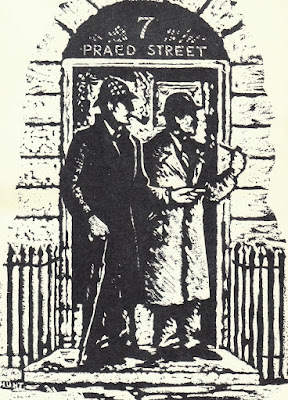 In addition to these collections, other Pons tales were released in different editions. In the mid-1970’s, following August Derleth's death, the Derleth Estate authorized a number of new Pons narratives to be prepared for publication by British horror author Basil Copper. He continued to release his own new Pons stories into the 1990’s, as well as offering various revised editions of his works. Additionally, a number of lost Pons stories from within Derleth’s files were found as the years passed, including another Pons novel, Terror Over London. But there were no new Pons stories for a number of years . . . until 2017 . . . .

In 2014, Pons expert Bob Byrne, who maintains a significant Pons website at . . .

. . . mentioned to me in one of our frequent emails that he was thinking about having an issue of his online Solar Pons Gazette that would be completely devoted to new Pons stories, as written by fans. I was thrilled, and sat down and wrote one. Then I quickly wrote two more. I began to pester Bob off-and-on over the intervening years about making the idea into a real book instead.

At some point, I decided to pursue the idea with the August Derleth Estate. I wrote to them, introducing myself and explaining my passion for Pons, which I’d had since a young age. To my great good fortune, a contract was signed and I was designated to contribute new stories to the Great Pons Saga.


“Sherlock Holmes’s decision to live alone in the bee-loud glade left an abhorrent vacuum in the life of London . . . and how admirably Solar Pons fills it!” – Anthony Boucher


I’d first read a Pons story, “The Adventure of the Grice-Paterson Curse”, when I was eight years old, in 1973, two years before I encountered Sherlock Holmes for the first time. I credit the enjoyment of that first Pons story for putting my brain in the right place to appreciate Holmes and Watson when I encountered them a couple of years later. Later, in my teens, I found my first set of Pons books - which my wonderful parents bought for me! These were paperback reprints from Pinnacle showing Pons and Parker on the covers in habiliments very similar to that of Holmes and Watson. 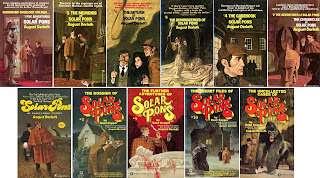 Although there is some debate as to whether Holmes actually wore a deerstalker – and I firmly, devoutly, and obnoxiously believe that he did, even when he was in town! – Pons always wears one. He is very deliberate in his attempts to honor Sherlock Holmes, and for that I honor Solar Pons. 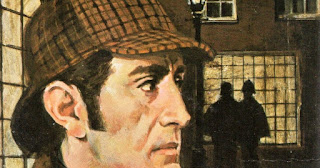 I’m very proud to be able to add to the Solar Pons legend with The Papers of Solar Pons, an authorized collection of twelve new Pons adventures:

Additionally, this volume has a bonus Sherlock Holmes adventure, my Solar Pons origin story, “The Adventure of the Other Brother”. There are also forewords from Roger Johnson, Peter Blau, Bob Byrne, Tracy Adam Heron, and Derrick Belanger, as well as several Appendices. 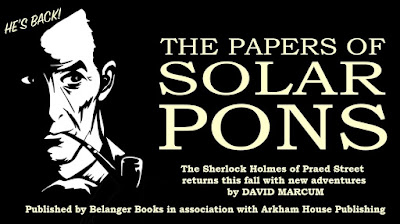 After this volume was in place, I started thinking . . . .

Realizing that this new book had the possibility to reawaken interest in Pons, or spread the word to those who didn’t know about him, I wondered if the original volumes could be reprinted. After all, interest in Sherlock Holmes around the world is at an all-time high, getting the word out by way of the internet has never been easier, and shifts in the publishing paradigm mean that the old ways of grinding through the process for several years before a book appears no longer apply.

The Derleth Estate was very happy with the plan, and over the next few months, I worked to convert the original Mycroft & Moran volumes into new editions, completely faithful to the originals. These new editions, published by Belanger Books, are the first versions of the original Pons stories by Derleth to be easily available and affordable in over a generation. In addition to the originally published seven volumes, an eighth contains all the previously lost or rare Pons stories that were discovered decades after Derleth's death, and only previously available to the most dedicated Pons fanatics.

The new volumes include: 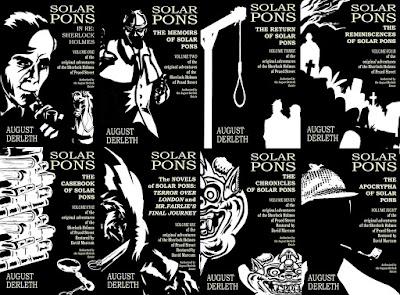 I hope that you’ll join Pons and Parker as they once again venture forth into the mysterious London fogs during that murky period between the two World Wars. Along the way, meet some old friends, and discover why Pons truly is “The Sherlock Holmes of Praed Street”.

“Ah, how I envy the new reader who has yet to meet Solar Pons of Praed Street.” – Luther Norris


Posted by A Seventeen Step Program at 5:51 PM