The following is an essay that I wrote which was originally published in The Baker Street Journal (Vol.63, No.4, Winter 2013). Over the past few years, whenever I've seen discussion about the modern settings of the Basil Rathbone films produced by Universal, I've referenced this essay, and then sent PDF's of it to those who showed an interest. After doing so again today, I realized that I could just as easily place it on my Irregular Blog, and then just post the link whenever the discussion resurfaces.

As two new Sherlock Holmes television shows compete on either side of the Atlantic to determine which one presents the more successful modern version of our heroes, many traditional Sherlockians watch with enthusiastic interest, hoping for nods toward the original stories. Other viewers, however, grind their teeth at the painfully shocking way in which an updated Holmes and Watson are being treated. These current television shows are not the first occasions in which our heroes have been moved from their correct time period and shown instead in present-day settings. The most famous examples are the final twelve Basil Rathbone films, produced by Universal Studios in the 1940’s. However, it’s time to reveal that three of these Rathbone films aren’t even Holmes tales at all. They are about someone else.

When I read the original Holmes stories, as well as any traditional pastiche that I can get my hands on, I play The Game, thinking about how the events in the narrative relate to both The Canon and historical events. Several years ago, while re-watching the newly-restored Rathbone films on DVD, I found myself – as I often do with many pastiches – being forced to rationalize away various incorrect or anachronistic elements as something that had been grafted onto Watson’s original notes by an editor or film maker with his or her own agenda. In the last nine Universal films, the modernizing aspects are fairly benign and can generally be ignored. The actual events of these stories could just as easily have taken place in the years before, during, or following the First World War, instead of during World War II. Occasional updated comments and modern devices were dropped into the films by script writers in order to make the films seem as if they’re actually taking place in the 1940’s.

But the first three Universal films, Sherlock Holmes and the Voice of Terror (1942), Sherlock Holmes and the Secret Weapon (1943), and Sherlock Holmes in Washington (1943), all have such modernized specifics incorporated into the narratives – airplanes, radio signals, complex equipment for dropping bombs – that there is no way that these could be any of Holmes’s World War I investigations, reworked and updated with just a few added modern details inserted here and there for 1940’s audiences. Clearly, these cases actually did take place in World War II, and were being investigated by a different sleuth entirely.

Consider another heroic detective, so much like Holmes that he must have apprenticed to him, and who would have been involved in the events of World War II, fighting Nazis, listening to radio broadcasts, traveling to Washington and searching for secret microfilms. Who else could it be but Solar Pons, with the assistance of his friend and Boswell, Dr. Lyndon Parker?

As a long-time devotee of Solar Pons, I’ve realized that the first three Rathbone Universal films are not Holmes adventures at all. Rather, they are Solar Pons narratives, with Pons and Parker’s names changed to Holmes and Watson for easier familiarity to the 1940’s movie-going public.

In the early 1940’s, with U.S. film studios’ efforts turning toward war-related topics, film producers decided – in their ignorance - to make movies showing Holmes fighting Nazis. After all, who better to pick than England’s most shining knight? The studios’ research quickly revealed that Watson had been dead for over ten years, and Holmes was in his late eighties. However, there was a successor to Holmes, named Solar Pons, who had a close family relationship to Holmes (1) and who had no doubt rejoined British Intelligence in the summer of 1939, soon after the conclusion of the chronologically-last Pons story, “The Adventure of the Golden Bracelet”, occurring just before Britain was pulled into the war. After all, Pons was just fifty-nine years old at that time, and he would have certainly helped in the British war effort.

Therefore, the first three Rathbone films from Universal, The Voice of Terror, The Secret Weapon, and Sherlock Holmes in Washington, were actually Solar Pons cases, relating Pons’s efforts against the Nazis. In fact, these are the only films ever made that show Solar Pons in action, albeit under Holmes’s name. The public probably wouldn’t have been as enthused by Solar Pons and the Voice of Terror or Solar Pons in Washington. Nigel Bruce didn’t accurately portray Dr. Parker any better than he did Dr. Watson, but there was something comforting about his avuncular presence that served a valuable purpose for war-time audiences.

After realizing how three of Pons’s wartime adventures had obviously been taken and updated by film makers, I realized that several of Pons’s other post-World War II cases had also been altered in the same way by later editors of Dr. Parker’s notes, and pulled into more modern times. For example, the book Sherlock Holmes in Dallas, edited by Edmund Aubrey, has Holmes and Watson traveling to the United States in order to investigate the Kennedy Assassination. It’s an interesting idea, but obviously Holmes and Watson weren’t around to do that. However, Pons and Parker certainly would have been. Later, when the narrative was published, the editor decided to change Pons and Parker’s names to Holmes and Watson so that modern readers, who might not buy Solar Pons in Dallas, would recognize the more familiar names. Several other pastiches and collections, such as Sherlock Holmes in Modern Times, edited by Ira Bernard Dworkin, which also benefit from this same kind of updating, and provide additional Pons stories when they don’t work either logically or chronologically as Holmes stories.

Having concluded that some of these “modernized” Holmes cases are actually those of Solar Pons, I’m still at a loss to know just who is actually being portrayed in either the BBC’s Sherlock or CBS Television’s Elementary. It certainly isn’t Holmes, Watson, Pons or Parker. However, I am glad to finally be able to completely enjoy the first three “modernized” Rathbone Universal films, knowing that they’re actually about Pons. It’s time that Solar Pons had some more recognition. 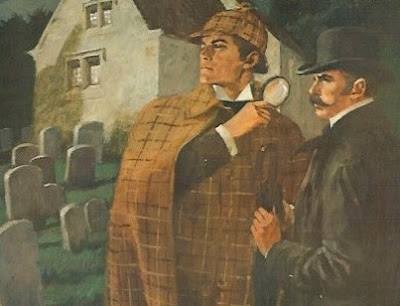 David Marcum plays The Game with deadly seriousness. He first discovered Sherlock Holmes in 1975 at the age of ten, and since that time, he has collected, read, and chronologicized literally thousands of traditional Holmes pastiches in the form of novels, short stories, radio and television episodes, movies and scripts, comics, fan-fiction, and unpublished manuscripts. He is the author of over sixty Sherlockian pastiches, some published in anthologies and magazines such as The Strand, and others collected in his own books, The Papers of Sherlock Holmes, Sherlock Holmes and A Quantity of Debt, and Sherlock Holmes – Tangled Skeins. He has edited over fifty books, including several dozen traditional Sherlockian anthologies, such as the ongoing series The MX Book of New Sherlock Holmes Stories, which he created in 2015. This collection is now up to 21 volumes, with several more in preparation. He was responsible for bringing back August Derleth’s Solar Pons for a new generation, first with his collection of authorized Pons stories, The Papers of Solar Pons, and then by editing the reissued authorized versions of the original Pons books. He is now doing the same for the adventures of Dr. Thorndyke. He has contributed numerous essays to various publications, and is a member of a number of Sherlockian groups and Scions. He is a licensed Civil Engineer, living in Tennessee with his wife and son. His irregular Sherlockian blog, A Seventeen Step Program, addresses various topics related to his favorite book friends (as his son used to call them when he was small), and can be found at http://17stepprogram.blogspot.com/ Since the age of nineteen, he has worn a deerstalker as his regular-and-only hat. In 2013, he and his deerstalker were finally able make his first trip-of-a-lifetime Holmes Pilgrimage to England, with return Pilgrimages in 2015 and 2016, where you may have spotted him. If you ever run into him and his deerstalker out and about, feel free to say hello!

His Amazon Author Page can be found at:

and at MX Publishing:

https://mxpublishing.com/search?type=product&q=marcum&fbclid=IwAR12tH4SUvE9nmEnnuqeI5GC7Tv69-NagPgmAZlxcz0vr2Ihza5_6jP-fXM
Posted by A Seventeen Step Program at 4:27 PM